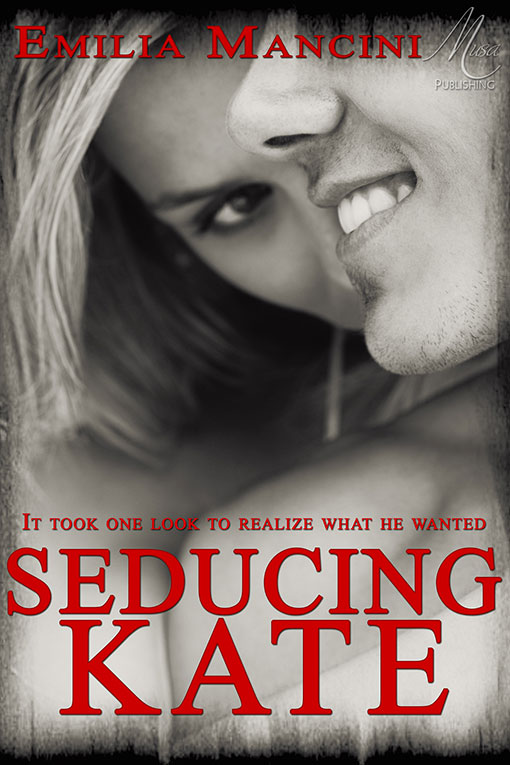 1. It’s always a pleasure to have a fellow Love, Lust, and Laptop gal visit. Please tell our readers what’s been going on the world in Emilia Mancini lately?

Thank you so much for having me! I am so excited to be here. I have been so busy! Final edits for Seducing Kate came in just under the wire. The release date was thiiiiis close to being pushed back, but since my editor and I were so dedicated and so determined that we basically didn’t sleep for the last two weeks before the release, we made it.

One thing that I have found to be really exciting is a local artist used Seducing Kate as inspiration for a new song for me to use in the book trailer. It’s a funky, folk/pop tune called Autumn Leaves. It is really different for book trailer music, which I think is exciting. It will stand out.

My later ego, Marci Boudreaux, has a release Forever Yours coming in March, so that is just about to get going. I’m going to try to sleep between now and then!

2. You write as both Emilia and Marci Boudreaux. Is there one you prefer? Why the different pen names?

I love them both. Emilia handles the super hot and sexy stories. Marci writes the super sweet and romantic stories. I couldn’t possibly choose a favorite because they both represent a huge part of what I love to write.

I use pen names for two reasons. The first being it offers a barrier or protection for my real life. If anyone dug deep enough, they could connect the dots between Marci and Emilia and the real me, but they’d have to actually look. The real me is a journalist, so I need that separate because that name is in print as well. If someone looks up a news story I wrote, they don’t need to see The Rebound or Seducing Kate come up in the search.

Secondly, because what Emilia writes is so different from Marci’s books, I wouldn’t want someone to pick up a Marci book and all the sudden they are bombarded with excessively graphic language and scenes. Where Emilia would say, “He grabbed a fistful of her hair as he shoved his cock balls deep into her pussy.” Marci would say, “His fingers slid through her soft hair as he entered her slowly, deeply.”

3. The Rebound was a hot, sexy, little story that I practically inhaled when I read it the first time. Please share with us your favorite scene. (We all know mine was the “secretary” scene.)

Aww, you’re so sweet. I’m so glad you liked it! I absolutely love that story and not just because it was my first release. It’s a great story. The entire club scene is my favorite, from the time they walk into the club until they sit back fully spent.

As for Mr. Mancini, whenever I mention The Rebound, he says, “Mmm, the ice cream scene.” LOL! Every time!

There is more to it than a simple cougar/cub affair. Kate—who has always had terrible taste in men—seems to confuse being submissive in the bedroom to allowing her boyfriends to treat her poorly. As she helps Kyle get a taste of what it’s like to be more aggressive in the bedroom, he shows her that she doesn’t have to tolerate being treated badly to have a guy who doesn’t mind being a little rough in other areas. It’s a great growing process for both of them.

I won’t tell you how it ends, but I’ll tell you that even while reading the last edits and sighing with exhaustion …I still cried at the end. These two characters are so great together.

Boxer briefs. I like a little snug and a hug, but not a clinch, ya know.

5. And while we’re on the subject of MILF’s…is there a DILF in your life?

Oh. I have such a thing for older men. Most of my characters are older. Kyle is one of the few younger characters I’ve ever written. I think the only other one was Eve Thomas in Marci’s The Messenger. Eve had just gotten out of college and was trying to make a name for herself as a journalist. But the others are always middle aged. Marci’s next book…mmmm…there’s a yummy silver fox in that one.

So is there a DILF in my life? Maybe not a real one, but there are so many imaginary ones I can’t keep them straight.

6. If you could have anyone in the world play Kate in your upcoming release, who would it be and why?

That, though, begs the question. Who should play Kyle? Hmmm…Suggestions?

7. Quick…share your favorite memory ever!

The last time I saw my grandmother. She blew me a kiss, winked, and told me she’d see me later. She died a few hours later, which makes it sound like a sad favorite memory, but it’s not. I cherish it because she was smiling and acting as she always had. It would have been much worse if the last time I’d seen her she was feeling ill.

8. What’s next for Emilia Mancini?

I’ve started really delving into fetishes. I don’t know why, but all the sudden they interest me. Right now, though, I have to finish this WIP for Marci.

9. And last, but not least, where can readers find out more about you?

I feel like I’m all over the place. I have websites, Facebook, Pinterest accounts, Twitter, and author pages for both Emilia and Marci. No wonder I feel overwhelmed by it all. I should really cut back on all that social media. Emilia’s contacts are:

As part of my release celebration I am offering readers a chance to enter to win not only a copy of Seducing Kate, but also a Silk Rope Set which includes wrist and ankle binds and a satin blindfold. (You’ll want these after reading the book, I’m just helping you out.)

Comment below, and on any of the blogs along my tour (listed on www.emiliamancini.wordpress.com) for a chance to win. The winner will be notified February 1st.

Emilia Mancini is the naughtier side to author Marci Boudreaux. Emilia stays hidden in the shadows like a nefarious side kick, slipping out only when the stories Marci wants to share are a little too grown up to be called sweet romance.

It was lust at first sight for Kyle when he met his roommate Justin’s mother Kate. Kyle, a college transfer, was too far from home to visit on short school breaks, so Justin took him to Minneapolis where his mother was serving up a family meal for Thanksgiving.

One look left Kyle with a healthy obsession for Kate which grew with each visit. When he landed an internship in Minneapolis, he moved in with Kate for the summer, and got in touch with his voyeuristic side. It wasn’t until one late evening and a few too many glasses of wine that Kyle began to suspect his attraction wasn’t one-sided.

When he dared to push the issue, he found Kate more than willing to succumb to his seduction.

I’d barely spent time with Kate, just a few minutes in the kitchen before John had come strutting in. I had sat across from her at dinner making awkward conversation while Justin and John glared at each other over the spaghetti and garlic bread. It wasn’t like she’d crawled across the floor half naked and begged me to fuck her.

What the hell was it about her? Sure she was beautiful, but I’d dated beautiful women. None of them had pushed me to the point of obsession. I wanted nothing more than to throw Kate down and fuck her until she screamed. Not cried out like she had moments ago, but screamed. And dug her nails in my back. And wrapped her legs so tight around me I couldn’t breathe. I didn’t know why. All I knew was my body was borderline insane with lust, and my dick was so hard it hurt.

I turned the cold water on and splashed my face a few times to snap out of the Kate-induced haze. When I was finally able to think about something other than having sex with her, I went back downstairs.

I tried like hell to focus on the game, but my mind kept wandering. No, it wasn’t wandering. It was reliving my trip upstairs, from the groans, to the flash of tit, to the blush on Kate’s cheeks.

I held out for another hour of video games before I couldn’t take the agony of wanting her any longer. I went up to my room and slipped between the cool sheets of the guest bed. I put a sock over my dick and got off to images of my roommate’s mother.

I pictured her pale ass sticking in the air as I gripped her hips and slid into her tight pussy. I imagined my fist tangled in her hair as she sucked my cock. I even fantasized about her standing over me in black heels and a tight business suit as she ordered me to jerk myself harder.

As I came—hard—I wondered how I was ever going to control myself around her.

Reply Jessica Villarreal
1:55 PM on January 24, 2014
Great interview! Thanks for the insight into your writing... I can't wait to read the book!

Reply Emilia Mancini
2:54 PM on January 24, 2014
Thanks, Jessica! Glad you could stop by! Christy asks the darndest questions!