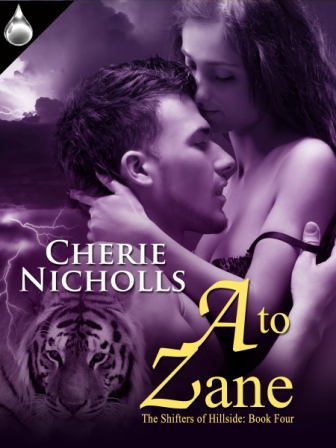 When Zane spots Abby, his tiger demands he stop everything and pursue. Zane couldn't agree more. Kickass she may be, but he knows just how to handle prickly women in denial of their own sexuality.

Abby has enough to do dealing with her overprotective family and friends. It’s practically a full-time job just keeping them out of jail. She really doesn't need a sexy tiger shifter throwing her libido into overdrive.

She has a business to run, and no matter how pretty the kitty is, she has more important things to deal with.

However, when her past catches up with her, the kitty may just prove to be her salvation. Damn it!

If this was any other place, Zane would have found a dark corner to sit in with his back against the wall watching everyone and everything in the room. A carryover from his days in the service, but one he couldn’t break, not that he’d tried very hard.

He cast a cautious glance at the corners again. His perch at the end of the bar, more open than he was used to with only one wall to his left, made his fur tingle. But the shadows and corners were off limits to him this evening. In a club like this, he was safer out in the open. Zane snorted. Safer? When had he become such a prude? His buddies would die laughing at him right now. One friend was standing behind the bar grinning like a cat. Ironic seeing as he was a wolf shifter. Jones had more tattoos than the last time Zane’d seen him. The wolf was larger than most, almost as tall as Zane, which seemed to give him more room for ink.

“It’s killing you, ain’t it?” Even Jones’ voice held a grin.

“Remind me to punch you in the face later.”

Jones laughed and went to serve a customer. There was a strong two drink minimum policy here, or so Zane had been told when he’d arrived. That rule was only for those not “playing” tonight. Anyone partaking of the delicacies offered was allowed soft drinks or water only.

Zane looked down at the soda in his hands and shook his head. Trust Carter Jones to invite him to a place like this.

“So, Mr. Anderson, how are you enjoying your night?”

Zane looked down at Rhea, dressed in a pair of tight leather pants and corset. She was cute, he would admit it, but he wasn’t really one to kneel down to others.

“Please, call me Zane. Your place is nice. Can’t say I have much experience in others but can’t complain.”

“Aww, did I just burst your cherry, Zane?”

He smiled at her. She suited Jones down to a tee. “You could say that.”

“Oh good. I do love de-flowering virgins.” She winked before heading back out onto the floor.

Zane sat with his back against the wall, watching the room with half an eye. People in different levels of undress were all around. A couple of females with white ribbons on their arms caught his attention.

“Jones, what’s with the white ribbons?” he asked when his friend came within earshot again.

“It means they are free, not tied to any one Dom. They’re open to play dates that’ll last this evening and no longer.”

“Yep, pretty much. Of course, there are rules, and if I thought you were really interested I’d go through them, but I know you too well, my friend.” Carter placed another soda in front of him and nodded toward the stage. “That’s my girl up there.”

Zane turned and saw Rhea on stage with a whip in her hand. She swung it with a skill he admired and made a mental note not to let her near him with it.

“Hey Jones, I come bearing stuff from Wall. He says to tell you this bag has all the clothes you asked for and that he totally smashed your score on the video game that shall, and I quote, ‘forever be called Wall’s domain’.”

The voice drew Zane’s attention like a moth to a flame. He couldn’t not look.

Standing about three feet to his right was a woman with long brown hair, dark loose trousers and a black long sleeve T-shirt on. In a place like this, she stood out like a sore thumb.

“Let him bask in his glory. I’ll be home soon, and then his little party will be over.”

Zane sniffed the air, full human. How was she part of Jones’ pack?

“Whatever. I came, I saw, I delivered as requested. Now I’m heading home.” She turned, the move brushing some of the hair away from her face, giving Zane a glimpse of beauty that made his tiger sit up and pay attention.

“Well now, little girl, who said you could wear shoes in my place?” Abby’s exit was stalled as she came face to face with Rhea.

Rhea took a step toward her, forcing Abby to back up until she was pressed against the bar right next to him.

“I asked you a question, little girl. I expect an answer.”

Zane flicked a look at Jones, who was silently laughing.

“I’m not a member here… I just came to give Jones some of his stuff… I’m not staying so didn’t think … I had to take my shoes off,” Abby stammered.

Zane watched as Rhea leaned in closer. It looked as if Abby was trying to press her way through the solid bar.

“Then I guess it’s a good thing you’re part of my pack then, isn’t it, Abby doll?” Rhea hugged Abby close, then stepped back. “Damn, Abby, sometimes you are too easy. How many times have I told you? Stand up for yourself, and for the love of God, stop hiding behind these awful clothes.” Rhea tugged at Abby’s shirt.

“Rhea! You’re mean, and you know it.” Abby blew out a shaky breath but visibly relaxed.

“Abby doll, you fall for it every time.” Jones reached over and rubbed the top of Abby’s head, messing up her hair. “Here, let me introduce you to a friend of mine. Abby, this is Zane Anderson, an old friend. Zane, this is Abby Short.”

The shy smile she gave him had him wanting to wrap her in Bubble Wrap and keep her safe.

“Nice to meet you, Mr. Anderson.” Abby held out a hand, and Zane felt like a giant as his hand engulfed hers. His nearly six feet eight inches made him tall, and although she was of average height, Abby looked so small standing there.

“Abby is Laney’s cousin,” Jones explained. Zane met the tiny little nutcase on a visit the year before. It explained why Abby was considered pack, and why they felt comfortable teasing her.

“Yep, cousin of Laney, that’s me. Although don’t worry, I won’t threaten you like she does,” Abby assured him.

“If I remember rightly, she promised to make me into a throw rug for something. Can’t be sure exactly what it was, but I do remember the threat.” He was aware of Abby discreetly trying to pull her hand free of his grip, but he wasn’t ready to let go just yet.

“No, I probably deserved it.”

“Okay, well I have to go. It was nice to meet you.” This time her tug was more forceful.

Zane let her go and watched as the little mouse ran for the door. When he turned back to Jones, both he and Rhea were standing there watching him.

“Two things. Laney will have your balls if you mess with her cousin,” Jones said.

“And don’t let the little shy girl thing fool you. Laney might have the crazy gene, and I say that with serious love and affection for my alpha. But Abby doesn’t need to worry about that. She has connections that make Laney look super sweet,” Rhea added.

“Yes, it is. So Laney might have your balls if you mess with her, but Abby’s other friends, well they’ll do so much worse.”

Zane gave them a half smile. “I do like a challenge.”